Virtual onboarding: What NOT to do

Virtual (or remote) onboarding, is the word on every HR professionals' lips right now.

This isn’t much of a surprise considering more than 71% of Americans and 48% of Europeans were working from home at least part of the time in 2020.

In the last 12 months, remote work (and by extension remote onboarding) has only grown as organizations refine their processes and begin to analyze the long-term effects of their early efforts.

In this two-part Q&A series: Virtual onboarding: The good, the bad, and the ugly, we look at the very best and the very worst examples of remote onboarding with two polar opposite, completely unfiltered Q&A sessions.

This post will cover the worst (what we would call the 'non-boarding') remote onboarding experience.

NB: Names and personal details have been changed to protect the privacy of our interview subjects.

Jesse: First off, how would you rate your virtual onboarding experience out of 5?
Ethan: I’d probably say maybe a 2 or a 3? There were some things that went quite well, but I feel like there were a bunch of issues that could have been solved with a face-to-face process. Things like not having access to [Microsoft] Teams immediately created some real barriers to getting to know people.

For me, the main thing [about starting a new job] is being able to establish relationships early on. I’ve worked for some organizations that have been quite thoughtful about how they facilitated those relationships, whereas the current role I’m in it was sort of left to me to figure out who I needed to talk to.

J: OK, so not ideal! Were there any digital onboarding tools involved in the process?
E: Mmm, it’s pretty informal. They have a whole bunch of information on the Intranet with templates and links but it’s left to management to distribute that. I think there’s some guidance for managers on how to run the process but I wouldn't say those are necessarily being followed.

J: You mentioned there were some things that were done quite well, could you tell us a little more about what went RIGHT?
E: My team was set up quite recently, so considering that, I was quite impressed with the online training modules. It was provided in a pretty clear way - they had webinars on various things like in-house software and corporate governance that you could follow at your own pace, and sort of fit into your meeting schedule.

J: And what could they have done better?
E: This might just be a particular manager but I felt a little bit unsupported. My manager didn’t have a one-to-one meeting with me until my fourth day on the job - which I thought was pretty shocking. I’d approached them the first couple of days, every day, and there was always a reason why we couldn’t meet. So yeah, just that absence of any time being put aside to talk me through what the role actually was and what the expectations were…

J: Yeah, that’s not a great introduction. Though it IS something we hear a lot, managers not being as involved in the process as they need to be - whether because of a lack of time or a lack of clear objectives and support from HR.
E: Yeah. Oh, another thing I worked through was that they bungled the pay approval lines and so my pay wasn’t approved and I had to wait until the next pay cycle to receive my salary.  Which is just another example of, yeah, bad onboarding practices I guess.

J: Let’s talk about clarity - thinking back to your first month on the job, do you feel like your role objectives were clear?
E: No, they weren't. But I think part of that was that it was a new role and so there was a general lack of clarity around what needed to be done.

J: And what about lines of communication and organizational hierarchy?
E: I think those were actually reasonably clear. But because we work with a lot of different entities, there is a bit of murkiness around who is responsible for what when it comes to special projects and authorization.

J: I guess in a complex organization those elements can be hard to get right, especially in a newly established role.
E: Yeah, it’s very changeable. I would say after about 6-8 weeks I probably had a fair idea of what the role was, but a lot of that was working myself to figure out where the gaps were.

J: How connected do you feel to your new organization?
E: Ahhh. To be honest I don’t feel engaged most of the time. I think the lack of in-person interaction and genuine human connection is probably the reason for that. I’ve never met any of my colleagues in person - I’ve been working in the role for 9 months and haven’t met anyone in person.

J: Have you ever felt like this in a new role before? This disconnected?
E: No. Definitely not.

J: And what has that lack of connection done to the social relationships with your new colleagues?
E: With my immediate team, there’s a fairly good dynamic but it's hard to develop strong relationships without that in-person connection. I’d say there’s almost a barrier in that calling someone up on the phone is often a lot harder, and you feel like you’re putting people out a bit more than just being able to turn to someone sitting next to you for an answer.

J: And would you say there’s been anything put in place to facilitate more connectivity between colleagues?
E: No. No, I don’t feel that there has been. I mean, very limited. We have a morning stand-up but it’s really more focused on planning out work. There’s some social chat at the margins but it’s limited. There’s not really the ability to have a conversation with one or two people when it's a meeting that has a hundred people in it.

J: How likely would you be to take another (similar) opportunity if a recruiter called you up tomorrow?
E: I would consider moving. I’m already starting to look around to see what’s available but yeah if something came up I’d probably move pretty quickly. For me, a sense of loyalty comes from having been able to establish relationships with people, but I think without that connection with my colleagues and managers, I don’t really feel that loyalty as strongly as I would in another role.

J: Would you say that your poor onboarding experience has directly contributed to that feeling?
E: YES. I think it has made it difficult to stay engaged or feel committed to the work.

J: If someone asked you to describe your virtual onboarding experience in one word, what would it be?
E: Ah. Poor? [laughing] Disengaged?

As you can see, the organization Ethan works for did a pretty terrible job of welcoming him into the fold.

This has resulted in low enthusiasm, poor levels of engagement, and ultimately an employee who is already looking for other opportunities - an unfortunate truth considering the cost of replacing a highly skilled employee can be as high as 213% of the cost of one year’s compensation for that role.

Whatever you do with your remote onboarding journey - be sure to take what lessons you can from Ethan's experience. Yes, he represents an extreme end of the spectrum, but this can be used as a reference for what NOT to do when it comes to successful virtual new hire journeys.

To make things even easier, we’ve developed an easy-to-use infographic illustrating good vs. bad onboarding at a glance - we hope it helps! 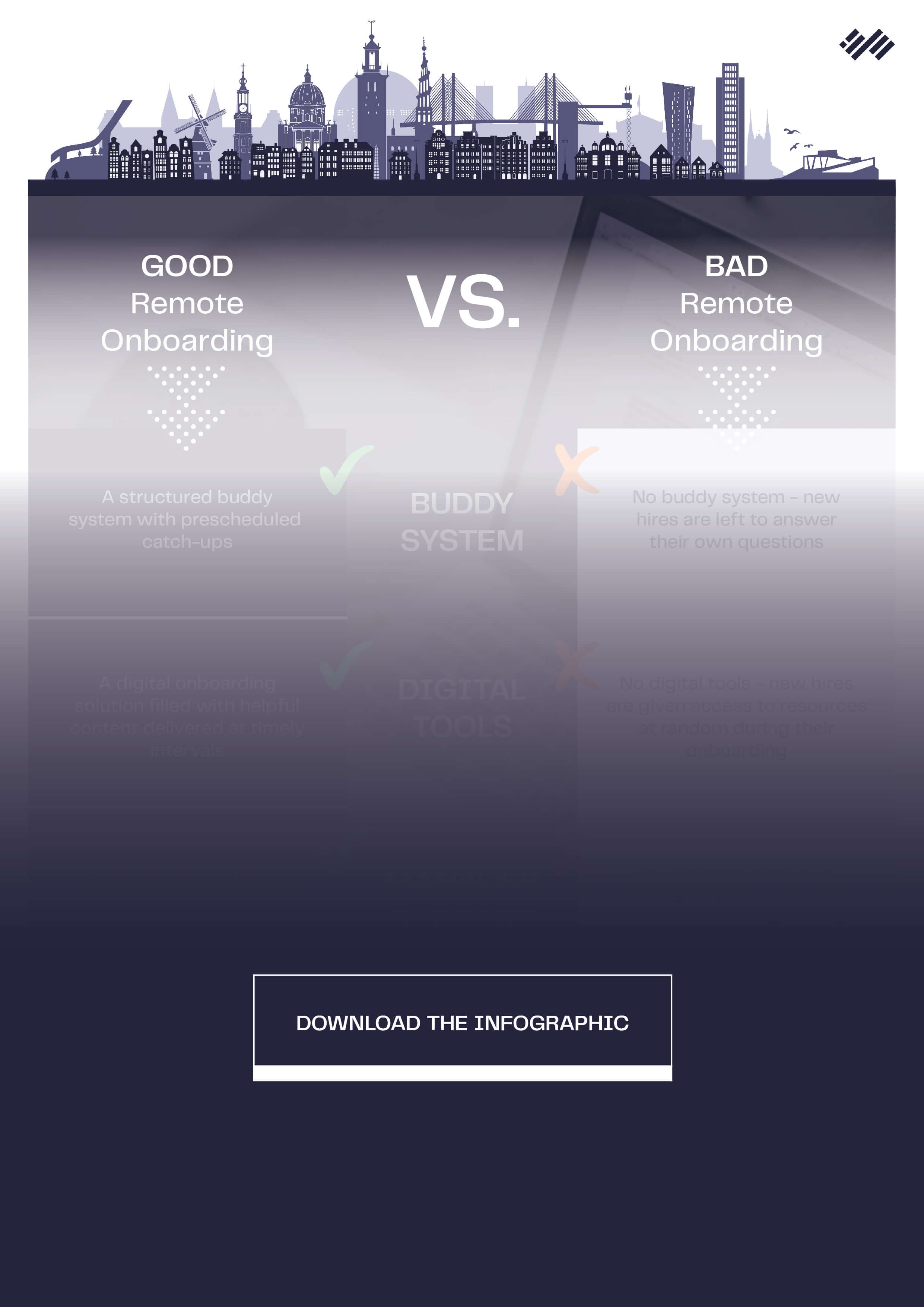 How long should your onboarding journey last?

Virtual onboarding: Getting it RIGHT